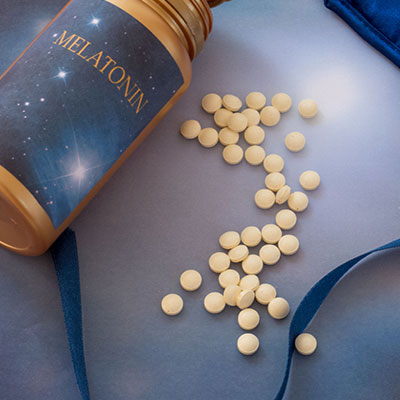 There is clinical evidence to indicate that supplementation with melatonin may increase human growth hormone (HGH) secretion.

We know that the majority of HGH is released as pulses when you sleep. These pulses are based on your body’s internal clock or circadian rhythm. Since that internal clock is regulated by melatonin, it stands to reason that there would be a relationship between HGH and melatonin.

Studies have shown that poor sleep can reduce the amount of HGH your body produces. In fact, getting an adequate amount of deep sleep is one of the best strategies to enhance your long-term HGH production.

Since melatonin has been proven to be a safe and natural way to produce more restful sleep, that alone creates an interdependent relationship between HGH and melatonin. But there may be more to the relationship than that — research has shown that a melatonin supplement can directly enhance HGH production.

Melatonin is a hormone made by the pineal gland, a pea-sized gland found just above the middle of your brain. It helps to regulate your body’s circadian rhythms, or in other words, it lets you know when it’s time to sleep and wake up.

Melatonin is just one of two hormones that are significantly involved in the regulation of sleep. The other is serotonin. These two hormones are literally day and night opposites. Melatonin, which puts your body into a relaxed state, is released by the pineal gland in reaction to darkness. Serotonin, the brain’s “feel-good chemical,” on the other hand, is released in reaction to sunlight. So, in a very real sense, melatonin and serotonin are day and night opposites – with one helping you to sleep and the other helping you to wake up feeling good and refreshed.

Both hormones are also heavily influenced by and have a relationship with human growth hormone.

Several studies have found that melatonin stimulates the release of growth hormone. The research has shown that it appears to do this by playing a facilitatory role in the neuro-regulation of growth hormone (GH) secretion at the hypothalamic level. In other words, something about the increased presence of melatonin signals the hypothalamus to trigger the pituitary gland to produce and release more HGH.

This is why peak HGH secretion happens when we are in deep, restful sleep, which is regulated by melatonin.

When you are not getting enough sleep, you are not producing enough HGH. Medical science has learned that it can become a kind of vicious cycle. That is because not only is most of your HGH produced while you sleep, but people with low HGH often have trouble sleeping. So, it becomes a kind of downward spiral. The less HGH you make, the less sleep you get, the less sleep you get, the less growth hormone you make, and so on, and so on… 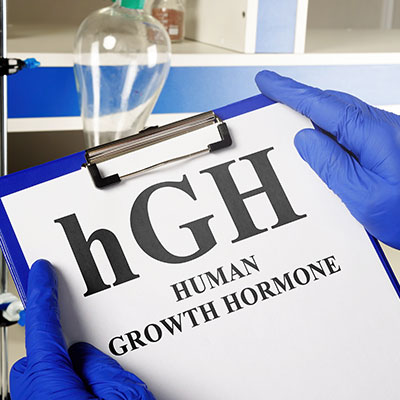 People with low HGH, as can occur due to age-related hormone decline, often complain of insomnia or disturbed sleep. This is because lack of sleep not only decreases your production of HGH, low HGH can lead to poor sleep because of the impact that low levels of HGH have on other hormones that influence sleep, such as melatonin, serotonin, and cortisol.

Taking supplemental melatonin – with your doctor’s advice and supervision can break this cycle.

What Does the Medical Literature Say About Melatonin and HGH?

An early study in 1993 was one of the first to establish a link between melatonin and the increased secretion of growth hormone. Published in the journal Trusted sourceMelatonin stimulates growth hormone secretionPubmedGo to sourceClinical Endocrinology, the study found that, “There is evidence that melatonin plays a role in the regulation of HGH secretion. Our data indicate that oral administration of melatonin to normal human males increases HGH release and HGH responsiveness to growth hormone-releasing hormones.”

Prior to that, in 1990, a study was published in the journal Growth Development and Aging that found that supplemental melatonin administered to hamsters produced “significant increases” in the production and release of HGH as well as IGF-1. This study also found that the increased secretion of HGH stimulated by the introduction of melatonin led to an increase in muscle mass in the test subjects.

A 2007 study published in Trusted sourceEffects of a single dose of Melatonin and resistance exercise on the growth hormone/IGF-1NCBIGo to sourceThe Journal of the International Society of Sports Medicine found that a single dose of melatonin, when combined with strength training exercise, significantly boosted the secretion of growth hormone. Interestingly enough, this study found that the effect of melatonin and HGH secretion was greater in females than in males.

In addition to these studies that show how HGH can be directly stimulated by melatonin, there are enumerable studies that relate to the relationship between HGH and sleep. For example, A study published in Trusted sourceGrowth hormone secretion during sleepNCBIGo to sourceThe Journal of Clinical Investigation concluded that “peak HGH secretion was delayed if the onset of sleep was delayed.”

And, A study from 2010 appeared in Trusted sourceSleep disturbances, daytime sleepiness, and quality of life in adults with Growth Hormone DeficiencyPubmedGo to sourceThe Journal of Clinical Endocrinology and Metabolism with the following conclusion, “GHD is associated with sleep disorders that may be caused by specific hormonal alterations as well as with poor subjective sleep quality and daytime sleepiness. Disturbed sleep is likely to be partly responsible for increased tiredness, a major component of quality of life in GHD.”

There is a complex relationship between HGH, sleep, and melatonin. Melatonin supplementation can be useful in naturally boosting your HGH levels in two ways. The first one is indirectly by helping you to obtain deeper, more restful sleep, and the second is directly by actually stimulating the production and release of HGH.

Now that you know a little bit more about the relationships between melatonin, HGH, and sleep, why don’t you take a minute to contact us and learn more about human growth hormone and your other critical hormones?

1. Is Melatonin a Sleeping Pill?

Melatonin is not a drug or "sleeping pill"; it is a nutritional supplement that has been clinically proven to provide more restful sleep. Taken before bedtime, melatonin supplements can help you fall asleep, improve sleep quality and increase sleep duration.

2. Is it Safe to Take Melatonin to Help You Sleep?

It is generally safe to take melatonin supplements every night. But, before taking melatonin or any nutritional supplement, check with your doctor. Melatonin is a natural hormone that plays a role in your sleep-wake cycle. It is synthesized mainly by the pineal gland located in the brain. Melatonin is released in response to darkness and is suppressed by light.

Human Growth Hormone, or HGH, is a hormone that is normally produced by your pituitary gland. HGH is primarily responsible for influencing everything responsible for cellular growth. Therefore, growth hormone is instrumental in building strong bones and healthy muscles. While HGH is vitally important during the growing years, we still need HGH even as adults so that we can continue to replace damaged cells and to maintain good muscle mass and bone health throughout our lives.

4. What Is the Relationship Between Melatonin and Growth Hormone?

Studies have found that melatonin can stimulate the production and release of growth hormone. Also, since melatonin regulates sleep and most of your body's HGH is produced during times of deep sleep, using melatonin to help you get a good night's sleep is a good way to help keep your HGH levels high.

5. What Is the Relationship Between HGH and Sleep?