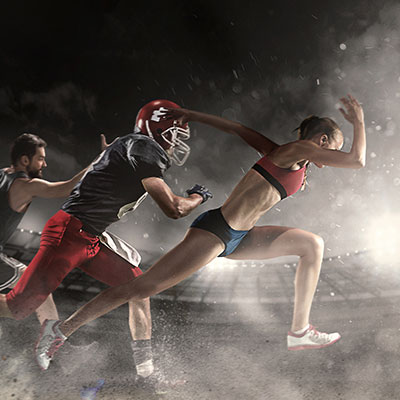 There is clinical research that has shown that human growth hormone can improve sports performance.

Most professional and amateur sports organizations ban human growth hormone as a “performance-enhancing drug.”  This is because it is undeniable that HGH can improve strength, stamina, and endurance, and therefore can enhance athletic performance.

HGH is not technically an “anabolic hormone”; however, it does have an “anabolic effect.” In the context of professional sports, “anabolic” sometimes seems to have a negative connotation. However, biologically speaking, the word literally means “to build up.” Therefore, HGH has “anabolic” properties because it plays a critical role in building lean muscle.

There is no question that HGH can improve athletic performance. Because of this, HGH, like its “cousin,” testosterone is banned in most professional and Olympic competitions. However, if HGH is legally prescribed to you for age-related HGH deficiency, one of the benefits you will see is improved results in any kind of personal sports you do.


Why Is HGH Illegal to Use In Sports

HGH is banned in sports because multiple studies have proven its ability to improve strength, stamina, endurance, and other athletic abilities. Taking HGH can give the user an unfair advantage, and that is why it is banned in most professional and Olympic competitions.

Human growth hormone is known to have performance-enhancing abilities. As a result, “doping” with HGH is banned from most competitive sports in the US. In 1989 the International Olympic Committee became the first major sports organization to brand human growth hormone, a banned substance. It is also banned by most professional sports leagues in the US.

In 2018 there were some controversial cases involving some high-profile athletes and the use of HGH. The most notable of which was Peyton Manning. Manning has since been cleared of any charges.

Benefits Of Taking HGH For Sport

Professional athletes cannot use HGH to up their games, as it will give them an unfair advantage over the competition. You, however, are not under any such restrictions. As long as you have been diagnosed with age-related HGH deficiency and have been given a legal prescription for HGH replacement therapy, one of the many benefits you will see from growth hormone therapy is improved ability in any personal sport that you are into. If you go to the gym, you will notice that you are getting more out of each workout; if you play on a weekend softball team, you will be able to run faster and hit the ball further.

Whatever recreational sport you may enjoy doing – running, tennis, swimming, biking, or even walking or hiking – you will get better at it once you are on growth hormone replacement therapy.

HGH is currently banned by WADA due to its ability to increase muscle mass and the potential to increase athletic performance. It has also been found in studies to enhance oxygen proliferation in the blood, and therefore also can increase endurance and stamina.

HGH For Recovery and Healing From Sports Injuries

HGH may be banned by most major sports organizations, but it may serve a purpose in the sports world.  A few years ago, Mark Cuban, the billionaire owner of the Dallas Mavericks, funded a study by the University of Michigan that was looking into how HGH can speed the recovery of ligament tears and other common sports injuries.

Cuban’s foundation put up $800,000 to back the two-year exploratory study. The results of the study were recently released. The study concluded that HGH helped to improve strength and enhance the healing of muscles of the knee in athletes who underwent ACL surgery. The use of HGH helped the athletes to recover quicker and return to the game sooner.

Any physical trainer will tell you, building lean muscle and burning fat is the main goal of any fitness program or regimen. Once you burn fat and build muscle, you boost your metabolism, increase your endurance, and are well on your way to improved health, strength, and longevity. In other words — your “peak performance.”

HGH will help you to build muscle when you work out and burn more fat. This will lead to bigger, stronger muscles and increased strength and endurance. It is widely accepted by the medical community that HGH enhances muscle performance in sports and can improve muscle function in the elderly or in adults suffering from age-related growth hormone depletion.

HGH also plays an important role in metabolism because it increases lean body mass and promotes more efficient burning of fats. This is why HGH is used for athletic improvement, advanced healing of sports injuries, and to treat musculoskeletal conditions, as well as the muscle weakness that occurs due to growth hormone deficiencies.

Pros And Cons of Using HGH In Sports

HGH is a controlled substance. It is to be used only when prescribed by a doctor. It is often abused by athletes even though it is banned in most major sports competitions.

Athletes will use HGH to build muscle and enhance strength, stamina, and endurance. While this is a “pro” or a benefit of HGH, it is illegal for professional or Olympic athletes or competitive amateur athletes to use HGH in this way.

The only legal “pro” of HGH in the world of professional sports is to use it to speed recovery and healing from sports-related injuries.

The main “con” of using HGH for sports, in professional sports anyway, is that it is, for the most part, illegal to do so. Other than that, there are many other cons of using or abusing HGH to enhance athletic performance without a doctor’s prescription and proper medical supervision. Because of its known ability to improve sports performance, there is a “black market: for HGH. It can be very hazardous, even fatal, to obtain HGH on the black market without a prescription.

All of the studies involving HGH and its impact on sports or athletic abilities confirm the known anabolic effect of human growth hormone and justify its exclusion from competitive sports as a performance-enhancing substance.

A 2010 study published in Trusted sourceEffects of Growth Hormone Doping on Athletic PerformanceAnnals of Internal MedicineGo to sourceAnnals of Internal Medicine examined the effect of a 2mg dose of HGH on body composition, endurance, strength, power, and sprint capacity.  The study recruited “recreationally active men and women” in randomized control trials. As in many previous studies of the benefits of HGH, the results of this one showed an increase in muscle mass and decreases in fat. But this one specifically looked at any increases in athletic ability. The results showed that HGH did indeed increase “sprint capacity,” as measured in seconds.

A Trusted sourceEffects of Growth Hormone Administration on Muscle Strength in MenNCBIGo to source2019 study looking at the impact of HGH replacement on muscle strength and tone in older men said that “Our study demonstrated an increase in muscle strength in the lower body part after HGH therapy in healthy men.” The study involved fourteen healthy men aged 50–70 years, whose baseline muscle strength was determined by leg press and bench press exercises, which focus primarily on quadriceps, the lower body part of the body, and pectoralis major—upper body part. After six months of HGH replacement therapy, the men in the HGH group did not show much difference in upper body strength, as determined by bench presses, but showed “significant” increases in lower body strength as indicted by vast improvements in strength in the leg presses.

HGH can improve sports performance. This is exactly why it is banned by most professional sports. It is important to understand, however, that this does not mean HGH is “illegal.” As long as growth hormone is legitimately prescribed for you by your doctor — for the average person who is not a pro athlete — there is nothing illegal or illicit about using HGH.

In fact, the idea that professional sports prohibit the use of HGH speaks volumes about what HGH can do to boost your own personal performance!

There is absolutely no such “ban” on the use of HGH to enhance performance by anyone other than competitive athletes.

Do not let the various sports bans lead you to believe that growth hormone therapy is dangerous or unsafe. In fact, just the opposite is true. The main reason that HGH and testosterone are barred from professional sports is because of their very real abilities to increase strength, stamina, and endurance.

Now that you understand more about the relationship between HGH and sports improvement, why not take a minute to call us and find out more about the many life-changing benefits of growth hormone therapy?

Human Growth Hormone, or HGH, is a hormone that is normally produced by your pituitary gland. HGH is primarily responsible for influencing everything responsible for cellular growth. Growth hormone is instrumental in building strong bones and healthy muscles. It is HGH that stimulates all of the processes from cellular division to bone growth that allow children to grow to teens and teens to achieve their full strength and stature as adults.

2. What Is Growth Hormone Therapy?

3. Do I Need a Prescription for Growth Hormone Therapy?

4. What Are the Benefits of Growth Hormone Therapy?

5. Why is HGH Banned in Sports?

Growth hormone is banned in most sports because of its known anabolic properties. HGH is in the category of Anabolic Agents on the World Anti-Doping Agency (WADA) Prohibited List and is prohibited at all times and for all levels of athletes, including elite, junior, and masters-level athletes.

Growth hormone and IGF-1 as doping agents in competitive sport

Professor in Diabetes and Endocrinology, Honorary Consultant Physician. Study: The Use and Abuse of Growth Hormone in Sports

The Garvan Institute of Medical Research, St Vincent’s Hospital and the University of New South Wales, Sydney, Australia. Study: The promise of growth hormone in sport: doped or duped