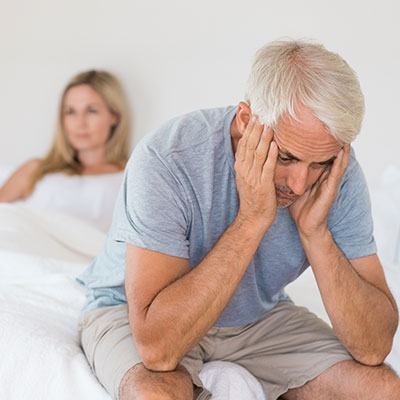 There are many things that can influence a man’s ability to perform sexually and get and maintain an erection. One that is often overlooked is the relationship between erectile dysfunction (ED) and hormone imbalances. Specifically, human growth hormone or HGH is one of the hormones that are integral to sexual performance and sex drive or libido in men.

Erectile dysfunction or ED can occur at any age; however, it is far more common as men get older. It has been estimated that more than 40% of men over 35 have experienced ED at one time or another. There are many changes that occur in a man’s body that impact sexual performance as he ages – not the least of which is significant drops in critical hormones such as HGH.

This is why men who have been diagnosed with a growth hormone deficiency (GHD) and who are also experiencing erectile dysfunction often see a reversal of their erectile difficulties when they begin HGH therapy.


What Is Erectile Dysfunction?

Erectile dysfunction, or ED, is defined as “the persistent inability to achieve or maintain an erection that is satisfactory for sexual intercourse.”

Statically speaking, 50% of all men have experienced erectile dysfunction at some time or another. After age 40, nearly 40% have to deal with the condition, and by 70 years old, about 70% of men experience some form of ED, usually accompanied by a loss of libido or sex drive.

In the last few decades, the number of men suffering from ED has been increasing. Scientists attribute this to anything from the greater number of hormones in our food and water supply to the increased stress in the lives of the typical adult male.

The good news is that ED, especially “age-related” ED, can be helped by growth hormone replacement therapy. HGH has been shown to both improve libido and help men with ED. Human growth hormone has been clinically proven to be a safe and effective solution for many men who are suffering from ED. When properly prescribed by your doctor, HGH therapy can be a proven alternative to oral ED medications and other ED treatments in helping many men with ED enjoy their sex lives once again. 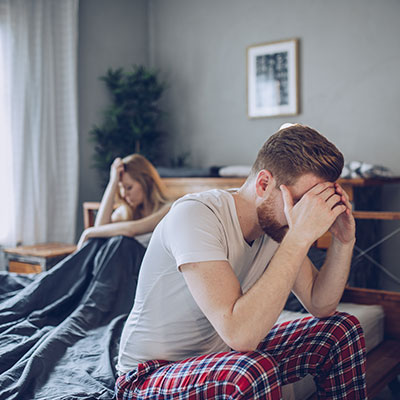 There can be many causes of erectile dysfunction or ED.

ED is a complex condition with many possible causes. One of the main causes of ED as men age is the breakdown and damage that occurs over time to the critical vessels that supply blood to the penis. In addition, all of the following behaviors and conditions can contribute to ED.

Men with age-related growth hormone deficiency (GHD) are also inclined to suffer from other conditions that can cause or also influence ED. For example, men with GHD also tend to have low testosterone, to be obese, have hardening of the arteries, and diabetes — all of which are known to contribute to ED. In addition, men with age-related growth hormone deficiency also tend to feel weak, fatigued, stressed, have poor or disrupted sleep, and can be depressed. Any, or all, of these conditions can lead to ED and a loss of libido.

Which Hormones Impact Libido or Sex Drive in Men?

There are two major hormones related to erectile function, one is the “male” hormone testosterone, and the other is HGH.

Both of these critical hormones decrease as a man ages. The steady decline of testosterone and HGH that occurs after your mid-twenties can lead to age-related growth hormone deficiency and as well as low testosterone. ED and a decreased libido or sex drive is a complication of both conditions.

It has been well-documented that the natural decrease in HGH and testosterone that occurs with age can contribute to erectile dysfunction and other sexual performance issues. For those men who are over the age of 40 and are suffering from low testosterone, age-related GHD, or both, testosterone replacement and/or growth hormone therapy has been shown to restore normal sexual function.

Human growth hormone is proven to increase sex drive and improve sexual performance in both men and women. For men, in particular, HGH therapy has been shown to improve or reverse the symptoms of erectile dysfunction.

As people age, one of the first things they notice is a drop in the sex drive, or libido, and other sexual performance issues — in men, that usually means erectile dysfunction.

There have been Trusted sourceHormonal causes of male sexual dysfunctions and their managementPubMedGo to sourceclinical studies have shown a relationship between low HGH levels and decreases in libido or sex drive and erectile dysfunction.

The benefits of HGH for male sexuality are many. HGH therapy has been found to:

It is not entirely understood how HGH can improve erectile function. One theory suggests that raising HGH levels increases nitrous oxide production. Nitrous oxide is instrumental in getting and obtaining an erection. Studies have also found that growth hormone therapy can increase testosterone. Low testosterone is a known contributing factor to ED.

Growth hormone plays a vital role in sexual performance in men. As a boy matures into a man, HGH is critical for the growth and development of the sex organs. Even once a man is fully grown, HGH continues to play an essential role in your ability to obtain and maintain an erection.

Studies have found that upon sexual excitement, HGH levels also increase in these critical blood vessels. The same studies found that men with ED had as much as seven times less HGH in their erectile tissues when non-erect than in men with normal erectile function.

Men who received HGH supplementation for other reasons, such as lack of vitality, or loss of muscle, also reported improved libido and increased ability to gain an erection. A specific 2001 study looking at the link between HGH and erectile function, published in the Journal of Urology, concluded, “our results suggest that penile erection [is] induced by growth hormone through its nitric oxide and cyclic guanosine monophosphate stimulating activity on human corpus cavernosum smooth muscle.”

What Does the Medical Research Say About HGH and ED?

Research indicates a there is a definitive link between arousal, HGH, and sexual function. Studies have found that upon sexual excitement, HGH levels also increase. The same studies found that men with ED had as much as seven times less HGH in their erectile tissues when non-erect than in men with normal erectile function. Trusted sourcePossible role of human growth hormone in penile erectionPubMedGo to sourceOne such study published in 2000 concluded, “[Our] results suggest that penile erection is probably induced by growth hormone through its stimulating activity on human corpus cavernosum smooth muscle.”

Men who received HGH supplementation for other reasons, such as lack of vitality, or loss of muscle, also reported improved libido and increased ability to gain an erection. A specific Trusted sourceSerum levels of human growth hormone during different penile conditions in the cavernous and systemic blood of healthy men and patients with erectile dysfunctionPubMedGo to source2002 study looking at the link between HGH and erectile function, published in the Journal of Urology, concluded, “our results suggest that penile erection [is] induced by growth hormone through its nitric oxide and cyclic guanosine monophosphate stimulating activity on human corpus cavernosum smooth muscle.”

A Trusted sourceGrowth hormone, prolactin, and sexualityPubMedGo to source2012 study looking into the impact of adult-onset HGH deficiency on libido in both men and women found that “a decrease of desire and arousability both in men and women, together with an impairment of erectile function in men, have been described both in patients with GHD.”  The study concluded that “Data on beneficial effects of HGH replacement therapy restoring normal GH/IGF-I levels have been associated to improvement of sexual function.”

Now that you know a bit more about HGH and Erectile Dysfunction, why not contact us today, and find out more about the many life-changing benefits of growth hormone therapy.

What is Erectile Dysfunction?

Erectile dysfunction, the condition that used to be referred to as impotence, is the inability to get and keep an erection firm enough for sex.

What are the symptoms of erectile dysfunction?

There are varying degrees of ED, from an erection too soft for penetration to complete inability to get hard. The symptoms to look for include:

How is erectile dysfunction diagnosed?

You should see your doctor if you have concerns about your erections or you're experiencing other sexual problems such as premature or delayed ejaculation or a loss of sexual desire. Diagnosis of ED may include:

How is erectile dysfunction treated?

Treatment for ED is based on the cause of the problem. Some of the treatments that may be used include:

How Can HGH Therapy Improve Your Sex Life?

While we have talked mostly about erectile dysfunction on this page, HGH therapy can improve sexual performance in both men and women. To sum it all up, the benefits of HGH for sexual wellness are many. HGH therapy has been found to: